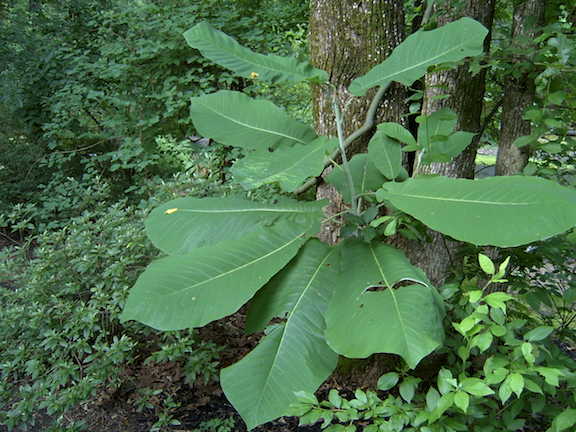 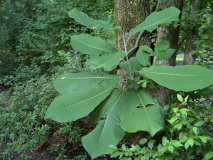 Bigleaf Magnolia is a rare deciduous native found in the understory of rich forests with enormous tropical-looking leaves (the largest simple leaves of any tree in the US) that have auriculate (earlobe-shaped) bases.

It is much less common than the similar Umbrella-Tree (M. tripetala), which has smaller leaves (though still large) without the lobes at the base. Surprisingly, the tree itself doesn't get especially big, usually no more than 50 feet tall. Most plants have a thick trunk and a rounded crown of stout branches.

The fragrant flowers, which appear in late spring or early summer, have six white petals surrounding a yellow and purple center. Unfortunately they are often partly hidden in the foliage and thus hard to see from ground level. The fruit is a cone-shaped pod containing large red or scarlet seeds.

Sold out
Add to Cart